Pacific Citizen Intervew re The Crusaders & "Bits of Paradise" 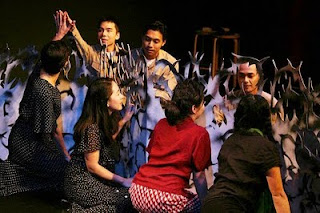 (Above Photo by Basile Kuo: Bits of Paradise play showcased at The Marsh Theater, San Francisco)

File this under ONE BIG STEP FOR MY DOCUMENTARY AND PLAY ABOUT YURI KOCHIYAMA. My 2nd day back in L.A., I was interviewed by a reporter from The Pacific Citizen, the major Asian newspaper about Bits of Paradise because they're doing a feature story on The Crusaders, the letter-writing campaign led by human rights activist Yuri Kochiyama when she was a 20-year old internee at Camp Jerome.

The article should come out around Nov. 18 in a special "World War II Vet" issue. I'm delighted that the paper will honor these remarkable women who never gave up hope while imprisoned behind the barbed wire of their own U.S. government and who boosted the morale of their young fighting men with upbeat, sometimes flirty letters and circulars until the war ended.

For more info on the progress of the documentary, please check out http://sites.google.com/site/bitsofparadisethemovie/home


In a nutshell, doc production has stalled due to lack of funds. Our hopes for a CCLPEP grant earlier this year, combined with the fact that filmmaking costs money, even if the crew is working for free, put the project on hold about 5 mos. ago.
Posted by Marlan Warren at 9:29 AM