All the world's your stage at Dominic Oliver's Behavioral Improv Workshop: "Fly without a Net." 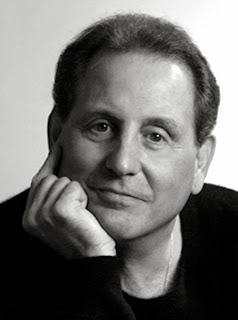 On a warm Monday evening at Dominic Oliver’s Behavioral Improv Workshop at the NoHo2 studio in North Hollywood, Sammy Corrado shares with a rapt audience a trick of the trade he’s learned as a “reader” who helps audition actors for the hot series, The Mentalist:

Corrado is one of several speakers Dominic Oliver has invited over the last year and a half since his workshop launched. When Corrado finishes, the actors get busy with theater games, improvisation, puppetry, masks, monologues and scene study.

“Sammy’s invaluable casting session experience gave us a unique opportunity to see both sides of a process that scares the pants off a lot of actors,” said Oliver, who invites speakers as well as guests. “I encourage audience. Strangely, it makes my players less self-conscious. I want them to fly without a net and have no fear.”

Behavioral Improv is Oliver’s own term. “We put the focus on character behavior as much as the great, funny line. Because I come from TV, film and stage, I can show how observation and behavior help actors find a character more easily for a part or audition. It’s improv as an acting process, not only a destination.” 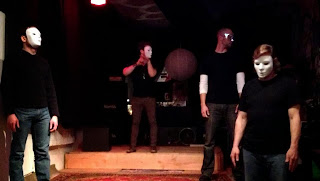 Sessions start with a guided meditation that allows players to settle into a more relaxed state. Then for the next few hours, Oliver takes his charges “from 0 to 60” with passion and humor. By evening’s end, actors are galloping off to unexpected, hilarious, places.

Oliver also taught improvisation and commercial acting at the Vincent Chase workshop in Hollywood. He took time out from his busy routine as an actor, teacher, screenwriter and novelist (he recently co-wrote a Cold War suspense thriller, Jitterbug Lift, under the pen name “Oliver Flynn” with partners Jay Flynn and Kaenan Oliver) for a little Q & A:
Q: Where did you grow up? Have your origins affected you as an artist?
A: My life is an improv. I grew up in New York City and wrote a scene for my first movie part that starts, I was a kid on 42nd Street; you had to act to survive.

Q: In the film, All That Jazz, the choreographer tells a frustrated dancer that he doesn’t know if he can make her a great dancer, but he knows he can make her a better one. Does that ring a bell?
A: Exactly my philosophy. I have great respect for Bob Fosse’s work. I know he made a legion of dancers much greater than they were. That’s what we all hope for as coaches.

Q: How do you help players break away from the obvious?
A: We take time to explore the core of the character, find the vulnerability and play the ambiguity to reveal what you feel. The more we tune in and observe others around us in detail—even someone we know—the more depth and variety we bring to our roles.

Q: Your workshop actors can start off stiff, but soon they’re zooming through improvs with comedy and inspired moments.
A: Once a player relaxes, frees him/herself up and begins playing truth, tapping into intuition and imagination, and connecting to one another, real magic happens.

Q: Do you ever push students to get beyond their comfort zones? Ever had anyone rebel?
A: I push them all the time. The comfort zone is what they’re coming to me to leave behind. A lot of actors have difficulty with anger, so we work on using and also releasing it. As for rebellion, if it’s there I help them work around it. The more confident they become, the quicker that disappears.

Q: What’s the deal with the masks?
A: The mask is a tool. Mask work, especially combined with music, informs the non-mask work in a way that simply doesn’t take place intellectually.

Q: Any favorite roles?
A: My best role was probably as a pawnbroker on NYPD Blue. My favorite is Mangiacavallo in Tennessee Williams’ The Rose Tattoo. And I got to play a Klingon.  I didn’t know much about Klingons, so I used improv tools to find that guy. Doing mirror work in costume and makeup, using the reflection, gave me the character.

Q: What is your greatest tool?
A: Compassion for the process. I focus on being perceptive about what turns players on, how to work out the kinks and get to the right place. What I give them is trust—in me, in themselves and each other—and that pays off.

For more info, check out http://OliverWorkshop.wordpress.com or Facebook at: https://www.facebook.com/DominicOliversBehavioralImprovWorkshop?fref=ts
The novel Jitterbug Lift by Oliver Flynn is available in paperback, Kindle and Nook online:

Posted by Marlan Warren at 2:42 PM No comments: