Spotlight on "Friggin' Whatever" Roots Rock Vet Ron DeSaram: "He even pees like Keith Richards!"

The year is 1980. In the photo that remains, Ron DeSaram can be seen bent over his guitar, massive hair flying in unruly waves against the night sky, anger written across his face in defiant happiness. He looks like he’s wearing all-white, but no way to be sure in this black & white action shot.

“That’s the night they shut the power down on us,” explains Ron, 37 years later, “July Fourth celebration in Lake Worth, Florida. Noise ordinance. Every time they’d tell us to turn the volume down, we’d turn it up.”

His wife, Nancy DeSaram, adds: “They turned off the power, started up the fireworks and then the palm tree next to the stage caught fire.” 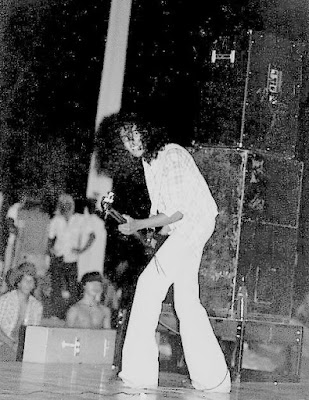 Read more »
Posted by Marlan Warren at 1:57 PM No comments:

Posted by Marlan Warren at 10:52 AM No comments:

At last, I've figured out how to put my Flickr photos from the L.A. Women's March 2017 in a slider on this blog. My apologies that I have not figured out how to not have my other photos on here, which will be included in my documentary, "What did you do in the War, Mama?: Kochiyama's Crusaders."

The film is about human rights activist Yuri Kochiyama and the Women's Movement she started while behind the barbed wire of a Japanese American internment camp during World War II. The photos you'll see here that reflect that film are from a performance of the Purple Moon Project at the Japanese American National Museum and there's one of the wonderful woman we interviewed who was 11 years old when she participated in Yuri's movement.

The beginning photos are the March. I'm sure you'll figure it out.

"Power never concedes without a Demand. It never has and it never will."

Posted by Marlan Warren at 2:59 PM No comments: