All photos by #MarlanWarren, copyright protected.


Originally Posted 2015: Yesterday afternoon I went to the Norton Simon Museum to unwind from what has been a very tense few weeks fraught with personal tension, and its sudden lifting and the relief that was flooding me. I try to go weekly, and spend the most time with the French impressionists, French sculptures and the Asian sculptures. 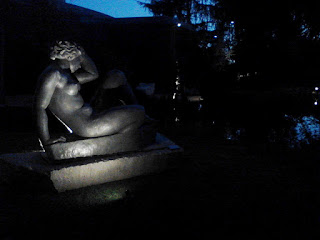 The museum is open at night only on Fridays, and I willed myself to hang out as dusk turned to night. I took the bus from L.A. to Pasadena, and needed to hop back on before I turned into a pumpkin. Last night, I took these photos as I absorbed the stunning beauty of the museum's lily pond and sculpture garden. The evening air was perfectly crisp and fresh. And I spent more time than usual inside, studying the art of Degas, Van Gogh, Monet, Manet, et al. Everything inside and outside me was finally feeling happy and balanced. Fresh hope.
I passed a guard standing in front of the museum theater's podium. I asked what was playing, and he said it was the "Umbrellas of Cherbourg" (the Catherine Deneuve film we watched in film school). I mentioned I hadn't seen it since that time, and the guard flashed me a sweet smile and said, "Well, come on in!" I said I had to think about it. A few minutes later, I decided the cat needed feeding and I had no desire to walk L.A. streets too late at night. So I declined. 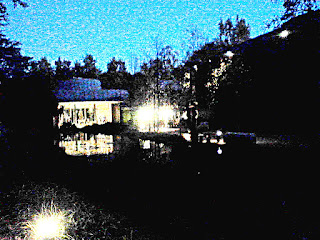 On the way home, a friend called and I told her about my day. How lovely everything was at last. Then I got home and saw the news for the first time that day...It is very hard to turn away from the Evil that is so pervasive. 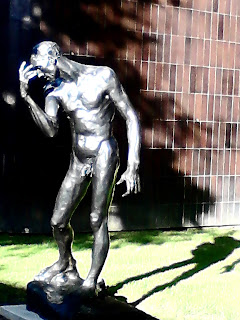 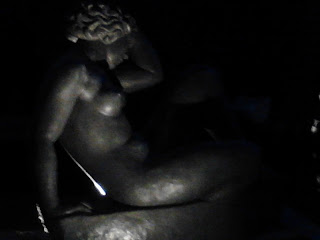 So I was riding in a subway car in L.A. when I thought I heard someone say:

Minutes later, I was waiting to usher for the East West Players' current show when I decided to check out the LA Artcore gallery downstairs. I entered a rather quiet space dominated by clever, engaging arrangements of black granite blocks engraved in white cursive writing with phrases we say or hear all the time--sayings so ingrained in our daily speech and consciousness that we rarely choose alternate ways to express ourselves. The more I viewed the work, the more I saw how these routine expressions may have made us rather "deaf" and lazy when it comes to speaking and hearing what is actually meant.

These strikingly accessible and humorous sculptures are by the German-born Nicholas Coroneos, who happened to be present on the day I visited his show with its tongue-in-cheek title, "Loss for Words."

The tower of stone blocks that greets visitors offers one block marked simply "Pause." Coroneos explains in his Artist's Statement the importance of the pause in our daily lives, filled as they are with an overload of soundbites:

"It is in this 'pause' that the seeds of empathy may reside." 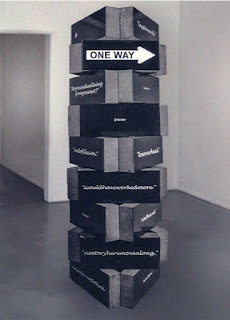 I was viewing this exhibition two days before the Nov. 8 election that would declare a man reviled by the "popular vote"...the "winner" of the U.S. Presidency. I viewed it one day before one of my dearest friends would collapse and die of heart failure in front of his wife. Two weeks earlier my cat had died in front of me. And a week after that, a man I wanted to be with explained why that would not be possible.

I had walked into this space with "100 people and no conversation" still ringing in my ears. I had walked in wishing for a shred of Hope. As I read Coroneos' Artist's Statement, I felt that word "empathy" and the need for it resonate throughout the gallery and my life. Humor gives us Hope. It has been frequently used to rebel against an oppressive status quo. And in Coroneos' work is a lightheartedness that enables us to absorb difficult truths. 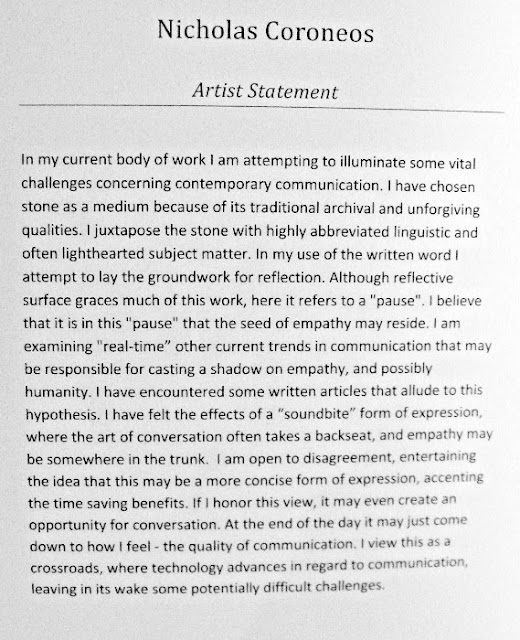 Not everything in the show is written in stone. This piece, entitled "National Register,"
is made of 100 lbs. of bronze from a 1200 lb. mold. Although the front looks exactly like an old-fashioned cash register, the sculpture is actually a total fabrication created from wax and cast as one piece. After casting, Coroneos welded on the register's keys by welding and built the wooden drawer that juts out from behind the ediface like a greedy hand.


Nicholas Coroneos happened to be in the gallery on the afternoon I visited. He was saying good-bye to a visitor when I arrived, and after viewing his art, we talked and he told me that although I was the only viewer at the moment, the space had been packed when the show opened, and attendance had been steady. I felt the need to tell him about what I'd heard on the Metro, and he said:

"If it's all right with you, I might use that in my work someday."

In the sense that a "found poem" is made up of overheard words, the blocks he sculpts feature the odds and ends of speech. It struck me as an interesting merger between right and left brains.

I asked this friendly artist for a brief interview and here it is:

Q: Why did you choose stone as your medium?
A: Because of its unforgiving qualities.

Q: How did this show come about?
A: The show is a culmination of conversations with friends, fellow artists, and at times, total strangers over a period of two years coming from a literal take on a phrase I grew up with:
"Nothing is written in stone."
Q: Why the title, "Loss for Words"?
A:  It's a working title. "Loss for Words" came from some personal struggles that I am working through. Art is always a challenge in the sense that artists put themselves in a very vulnerable place if they are truly speaking from the heart.
Q: Would  you say the show has been successful?
A: Yes. The show is very successful, in that I had an intended goal to show this body of work as a solo show, and I feel it comes across much stronger as a cohesive body. One piece relates to another like links in a chain.
Q: A solo show seems like a big undertaking. How did you manage it?
A: I did have to call in some friends to help with some aspects of preparing for it. Support for this show made it possible. I am truly grateful for those who showed up at the opening. That was an added bonus.
Q: What is your favorite high point with this show?
A: The most successful aspect for me was witnessing the interactions between people and the work, especially the conversations that the work inspired.
Q: Tell me a bit about your process. What's next?
A: This work is constantly evolving to now include an audio element and an olfactory one as well. The wonderful thing about art is that I am pleasantly surprised about what seems to make itself known to me, and then following that idea. 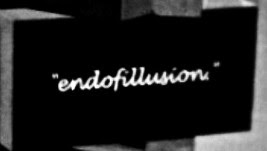 For more info, to contact the artist, etc. check out http://www.coroneosart.com
E-Mail: coroneos.art@gmail.com