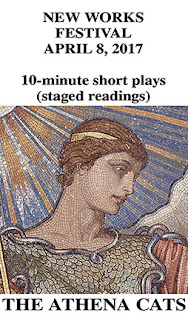 "I'm thrilled Athena Cats invited me to be part of this afternoon of 10-minute plays," said Warren. "Athena Cats--with its focus on women playwrights and directors--is like a dream come true for me."

Athena Cats is the brainchild of playwrights/screenwriters Debbie Bolsky and Laurel Wetzork. This collective of Southern California area female playwrights and directors formed to bring unrepresented works written by women to the stage.

According to the Athena Cats website, the statistics for female playwrights are grim. Twenty-three percent of plays produced during the 2011-2014 season were written by women, according to a Female Playwrights Institute study.

"Our goal is to redress this imbalance," said Athena Cats co-founder Laurel Wetzork.

When Warren's one-act "Bits of Paradise" showcased at The Marsh in San Francisco, it received praise from "Asian Week":

"Based on letters written between Japanese American girls and women in the U.S. internment camps and Japanese American soldiers during World War II, Bits of Paradise places its footprint on the timeline of a much needed theatrical examination of the Asian American journey."

"Chasing Sangha" focuses on a Night in Hell in the California winter desert where two brand new women friends try to achieve mystical enlightenment according to a Shaman Certification course one of them is taking, but Murphy's Law comes along with them. "Sangha" refers to the Buddhist concept of finding strength and protection by bonding with like-minded people.

Read more »
Posted by Marlan Warren at 1:15 PM No comments: