BOOK REVIEW: BUZZ KILL BY KATE THORNTON - "Try not to think of corpses..." 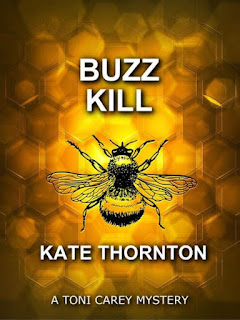 “The next time the flowers nod in the summer breezes, and I see honeybees busily going about their business, I’ll try not to think of corpses, betrayals, bludgeoning, and death.”

If Killer Bees didn’t exist, mystery writers would have to invent them. Fortunately for Kate Thornton they do exist, so she grabs their scary potential and runs with it in the first book of her Toni Carey series, BUZZ KILL.

Having received an urgent note from her Uncle Horace to visit him in the fictitious California burg of Loma Vista “on a matter of Great Importance,” Toni Carey arrives to find his house trashed; a weird pile of smokey ashes in the closet; and a strapping good-smelling small-town-detective type investigating the fact that her uncle was found alone in a coma.

A semi-retired “bug expert” professor who specializes in butterflies at the local college and tends his own beehives at home, Uncle Horace is an unlikely candidate for leaving himself vulnerable to anaphylactic shock.

So what happened and who is responsible?

When a man Toni never heard of turns up dead in her uncle’s shed—undeniably done in by bees—the story officially turns into a Murder Whodunit. Is it only one perp or more than one behind the coma and the death? Who can be trusted? Who should not be believed?

A seasoned magazine article writer, Toni is adept at research. As she cautiously investigates, she encounters enough suspects to remain suspicious of nearly everyone she encounters: Should she take at face value Uncle Horace’s well-preserved lady friend or his “beehive assistant” teenage neighbor boy with the weirdly nonverbal mother? And what about that cheeky, sexy receptionist at the university’s Biology Department?

Stirred by the electric lust she feels at the touch of a handsome man’s compassionate hand or the sight of a holstered Barretta pressed up against his warm body or the sudden kiss in a biology laboratory from a biologist she just met, the too-long-celibate Toni struggles to sort the truth from illusion when it comes to her feelings vs. her “who’s who?” need for insight.

Will she end up in bed with the soap-smelling detective or the lightly fragranced bee researcher? Or neither? Or both?

Thornton’s witty writing keeps all these juggled balls aloft. Her skill with turns of phrases gives jolts of pleasure throughout:

“After I finished throwing up in the bushes, I ran into the house and started to dial 911, then thought better of that. The guy in the shed wasn’t going anywhere and an ambulance would just be a formality.”

Oh, and yes, there is a great deal of fascinating information about Africanized bees and bees in general for avid bee-lovers and the bee-curious.

I recommend BUZZ KILL for anyone looking for a fun getaway from their boring life.

KATE THORNTON has been writing and editing short stories for years, and now has written both the TONI CAREY MYSTERY SERIES and the KITTY AND COCO MYSTERIES. Her first short story, "Just Like In The Movies", was published in David Firks' legendary BLUE MURDER and nominated for a Derringer award. With over 100 short stories in print, she is retired from the US Army, has been a contestant on Jeopardy!, once kissed French film director Francoise Truffaut, and currently lives with her husband, two dogs, and two cats in Tucson, AZ, where she is working on her next book.

Look for BUZZ KILL and MEDIUM DEAD (Books #1 & #2 in the Toni Carey Mysteries) and KITTY TAKES A CHANCE (Book #1 in the Kitty and Coco Mysteries.)

Posted by Marlan Warren at 11:30 AM No comments: 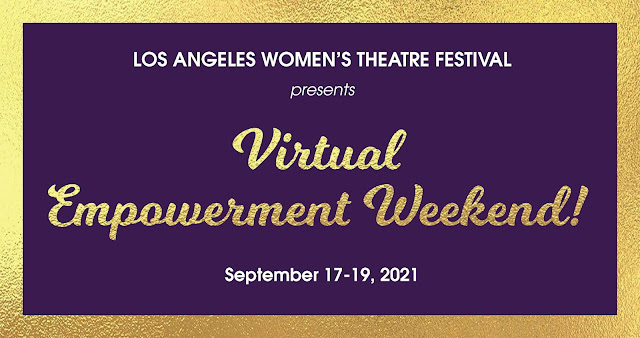 On Saturday, Sept. 18, Warren will discuss with fellow panelists and moderators the topics "Successful Marketing for Your Solo Show" (11 a.m. PDT) and "Teamwork Makes the Dream Work" (12 Noon PDT).

Los Angeles Women's Theatre Festival Co-Founder Adilah Barnes described this 3-day event as "career training from industry professionals, designed to give a boost to solo performers, but will also be of value to anyone contemplating online or live theatrical production in Los Angeles and those who wish to tour in these changing times."

"I've admired the L.A. Women’s Theatre Festival for years," said Warren. "It's an honor to be included in this dynamic esteem-building gathering for women in theater."

Warren produced and directed her plays, "Bits of Paradise: Kochiyama's Crusaders" and “Bits of Paradise” in Hollywood and San Francisco respectively. Both focus on a women's campaign behind the barbed wire of the Japanese American Internment of World War II, and feature an Asian cast. She also penned and directed a "women's self-defense" musical, "Hallelujah Whiplash!" at San Diego’s Marquis Public Theatre, and her comedy about New Age female bonding, "Chasing Sangha," was presented at the Athena Cats Festival in Santa Monica.

As a promoter, Warren offers public relations and marketing strategies for entertainers. "It was a pleasure working with the brilliant solo performer, Sherry Glaser,” Warren said, “because she brings ambition and inspiration to any endeavor."

Founded in 1993 by Adilah Barnes and Miriam Reed, the Los Angeles Women’s Theatre Festival holds the distinction of being the oldest Annual Solo Festival for women in Los Angeles celebrating powerful women performers. 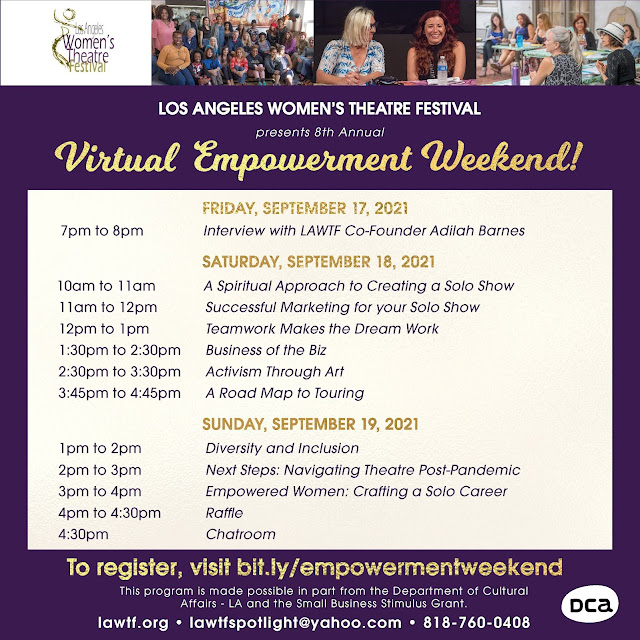 Tuition for the week-end:

A Zoom link will be sent to those who have completed registration.

This event is made possible in part by a Federal stimulus supplement grant administered by the Los Angeles Department of Cultural Affairs.

Posted by Marlan Warren at 4:57 PM No comments: