The work of the Crusaders, although obscure and unknown, was a means by which young people in confinement were able to prove that no physical boundaries could stop them from transcending beyond the 'barbed wires.' - Yuri Kochiyama (aka "Mary Nakahara")#YuriKochiyama 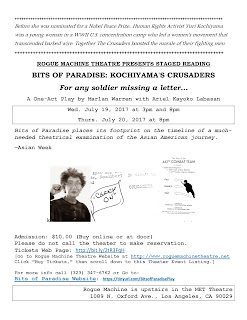 At the invitation of Rogue Machine Theatre in Hollywood, "Bits of Paradise: Kochiyama's Crusaders" will be presented as a staged reading on July 19 (3pm and 8pm) and July 20 (8pm). The play, by Marlan Warren in collaboration with Ariel Kayoko Labasan focuses on a women's movement founded by renowned human rights activist Yuri Kochiyama when she was known as 20-year old "Mary Nakahara" and incarcerated in U.S. concentration camps during World War II with her fellow Japanese Americans. Calling themselves "The Crusaders," the girls and women mobilized a morale-boosting letter-writing campaign that ensured that "any soldier missing a letter" would receive mail.

"The performances will be more 'staged' than 'reading,'" explained Warren, who co-produces with Labasan, and directs the play. "Some actors may not be holding scripts, and there will be action sequences, props and costumes."

Warren originally directed and produced "Bits of Paradise" as a Reader's Theater piece at The Marsh Theatre in San Francisco in 2008.

"Bits of Paradise places its footprint on the timeline of a much-needed theatrical examination of the Asian American journey."--Asian Week

Recently, the play was reworked and re-titled "Bits of Paradise: Kochiyama's Crusaders," after Warren joined forces with actor/playwright Ariel Kayoko Labasan, whose solo show, "Yuri Speaks Out!" played to packed houses at the Hollywood Fringe Festival. Labasan will reprise her role as Yuri Kochiyama, portraying the activist from ages 20 to 84.

Read more »
Posted by Marlan Warren at 1:21 PM No comments: