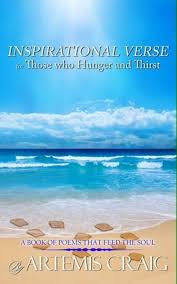 Title: Inspirational Verse for Those Who Hunger and Thirst
Subtitle: A Book of Poems to Feed the Soul
Author: Artemis Craig


I have respect for anyone’s spiritual journey. And I have a lot of respect for the poet Artemis Craig, whom I met at USC, while we were both in film school studying screenwriting. We only met once, in the changing room of the gym, but her feisty humor made a lasting impression.

Now, a couple decades later, Craig has risen out of the ashes of Hollywood as an evangelical poet who has walked through fire, and lived to tell her story in the form of Inspirational Verse for Those Who Hunger and Thirst: A Book of Poems to Feed the Soul.

With straightforward honesty and a gift for storytelling, Craig has arranged the poems in this anthology as an odyssey washed in the blood of heartaches, losses, and disappointments after returning home as the Prodigal Daughter. All the elements that make  “inspirational verse” inspirational are there (finding and praising the Grace of God), woven into searing moments from Craig’s life, told with her flair for dramatic prose and metaphor.