Angels in the City of Angels

My stay in L.A. has been made pleasant by the presence of my friends' children (and dogs, cats, etc.) as well as their own dear selves. Here's a collage of what I'm talkin' about. I've enjoyed taking their photos and playing with them.

Life is too short for regrets. In another lifetime, I would have had my own kids. But in this one, I'm happy to enjoy these little angels. 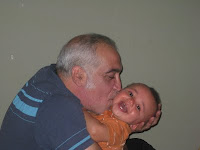 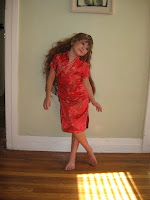 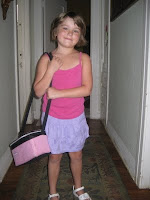 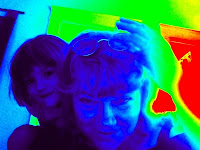 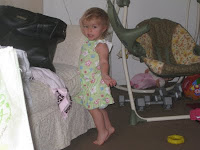 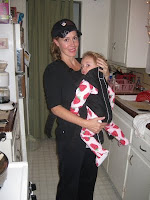 Posted by Marlan Warren at 1:43 PM No comments:

The Ai and I (South Pasadena, CA)

IS THERE LIFE AFTER SUSHI?

Or more to the point, is there any sushi in the After-Life? Because if the answer's "NO," I don't wanna go.

This was shot by Bill Marsden, owner of Marsden's in Pasadena -- a restaurant that serves lavish comfort food. Mr. Marsden was sitting at Ai Japanese Restaurant's L-shaped sushi bar when he let it be known that he was a newbie to the scene. Regulars promptly drew him into the Circle of Love.

P.S. - I'm the blonde in the back. The woman next to me has just been showing cellphone photos of her two daughters, BOTH past Rose Bowl queens and a photo of her wedding day All Those Years Ago. Her friend is in the foreground.

"Is that all you're eating?" they'd asked me as I nursed my spicy tuna roll in the midst of severe employment drought. "She is social-iz-ing tonight," Fumito the sushi chef drawled in a singsong that formed the crust on layers of historical innuendo too vast for either of us to explain. Rose Bowl Queen Mama offered me some of her tempura shishito. Mild chile peppers rolled in a batter that's lighter than the jokes at Ai.

Ai doesn't enourage patrons to buy lots of sushi and then leave, and God bless them, they'll let an old friend sit and enjoy laughter & conversation even when she's broke.

In San Francisco I socialize with, uh, um...nobody. 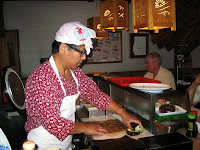 Here's Fumito on the day HBO's "Madmen" was shooting in Ai's parking lot. Making sushi for the crew out back, and attending inside customers. Crew members would duck in to check on the sushi progress, walkie-talkies in hand. Hollywood meets South Pas!

I'm a slacker when it comes to spending money at Ai. Lunch specials are super cheap and I usually get the "combination" -- an array of fresh sushi for under 8 bucks. And I love their spicy tuna salad when I can afford it at 10 bucks a throw. Secret spice in the tuna. Trade secret.

I missed Ai as much as I missed Chinatown and my L.A. friends. Returning to Ai is like returning to my childhood home. Familiar, comforting. Beautifully decorated with owner Amy's amazing taste.

From '95 until I left in '04, I ate at Ai a max. of 5x/wk. Sometimes driving across town to get there from work. Customers range from Bikers to Astrophysicists (Cal Tech is nearby). Talk is usually fun stuff.

Over the years, Fumito has watched children grow up and bring their children. And as for me, I can remember when the bar sizzled with sex talk and flirtation. Now there is more talk of cancer scares and the occasional funeral.

The day I returned to Ai, they were getting ready for a funeral. Amy had sent flowers and was staying behind to hold down the fort. A longtime customer had passed away of cancer and Fumito was joining some regulars when his shift ended.

For days after, regulars discussed the man who had died. It was as if each secretly wondered if Ai would come to their funeral. 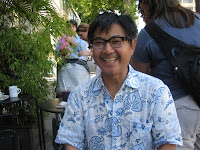 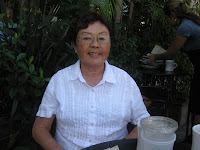 Ai is celebrating its 30th anniversary this year. Amy and Fumito haven't quite worked together for that long, but darn near it. They both gave me a warm welcome upon my return, and one fine day, I went to lunch with them in Old Town Pasadena. Croissant sandwiches. I didn't dare order fish.

I write this blog with no knowledge of my future. I have to return to San Francisco and close up my apartment. Then what? I don't know. I firmly believe that I need to be in L.A. If for no other reason than to experience warm moments like these. 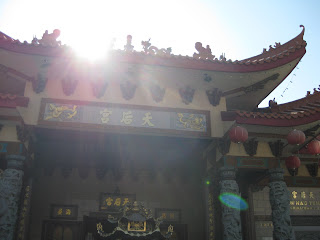 Good People Gone
Mr. Ho, Mrs. Kong and Mrs. Chen are gone now. All that is left of the Tai Chi group that I joined in '95 is a handful of people. It was a loosely organized group that practiced Yang style and esoteric Wu Shu forms.


We'd meet in the parking lot of the Buddhist temple on Yale Street in Chinatown every morning at 7 a.m. Rain or shine. Mr. Ho was a tall stringbean of a man who was either smiling or nodding. After we'd finish, he'd yell out: "YUM CHA!" Tea time. Then we'd all march to the nearest dim sum hangout. Mr. Ho would always throw food on our plates if we weren't eating fast enough. To make sure we all got enough.


Mr. Ho contracted lung cancer in '03 but beat it into remission after surgery and a diet of fresh juices.
He passed away two years ago. "Too far for the old people to drive for the funeral so they had a memorial service in Chinatown."

Mrs. Chen was an adorable sprite with diamond earrings and Mary Jane Tai Chi slippers. She "disappeared," said Alice. She never liked to be around people when she was sick. Mrs. Kong passed away of a bad heart, after taking care of the four grandchildren while her children worked. "Now they have a shrine that they pray to in her memory, believing that she looks after them from the Other Side."

Every morning still Mr. Kong and the "other" Mr. Ho dine on dim sum in Chinatown. Sometimes joined by old friends who no longer do much Tai Chi.

For me, re-entering Chinatown is like going back into a pleasant dream. The pungent smells, cracked sidewalks, pushing people in front of the vegetable stands...all settle into my pores like welcome rain.

"They say it can't be five years since you left," Wendy the Hong Kong woman tells me. "It seems like you were only gone a short while. 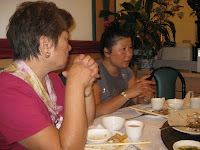 Alice is in the foreground, listening to Wendy. Both from Hong Kong, they are the two English speakers at the table. Alice's husband passed away two years ago. When I knew her, she'd often talk about "retirement." It seemed so far away. Now she takes watercolor and Bible Study classes. Enjoys the days.

There are stories to tell. But out of respect, I will save those for myself. The history doesn't matter really. To sit with all of them while tea is poured, the roast pork speared with eager chopsticks...to see their smiling acceptance at my presence.

More soothing than a massage.

The woman in the foreground is Mrs. Lau, 92 years old. Ten children. Vietnamese. Still takes classes in English, candy making, Tai Chi. She's in better shape than I am. 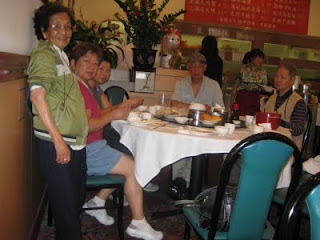 Posted by Marlan Warren at 11:59 AM No comments:

In the beginning there was Chinatown - Part I (Tai Chi) 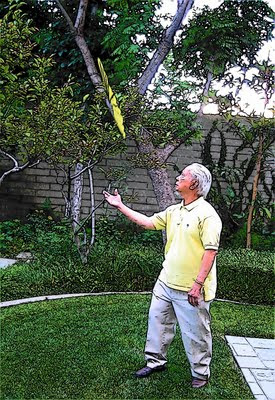 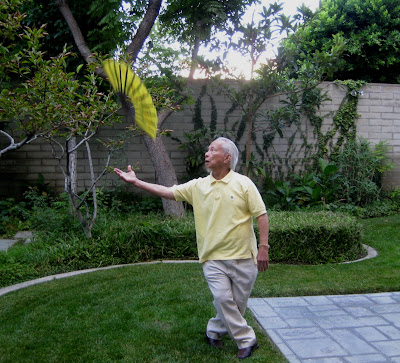 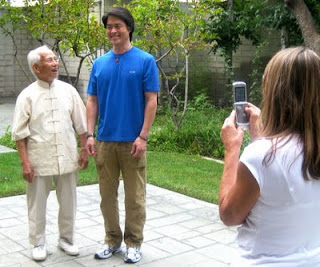 First up in my sentimental journey was Chinatown.

The man in the photo is known to Chinese as "Au Si Fu." He was one of my Tai Chi teachers. Kind of the last one left standing. I never expected to see him agian. But found him still teaching and very much alive at age 84.

"Si Fu" means "master teacher" and "Au" is his last name. Asians put their last name first. His whole name is (English style) "Kiet Chi Au." He carries documentation of his achievements in a briefcase and is still a self-promoter. His photo album ranges from his early Tai Chi weapons mastery in the 1920s to the theater performances he choreographed (Tai Chi fan and sword are his specialties).

With my dance background, in '97 I was able to pick up the fan without much trouble. I still have difficulty remembering the Tai Chi (Cheng Man-ch'ing style) and double sword he worked to teach me. So I'm not the best student, although I am devoted.

We have dealt with the language barrier as best we can. It's easier when he's telling me something that I can figure out (he speaks almost no English), and frustrating when I can't. This last meeting actually went awry due to his urgent need for a translator. But that's another story. 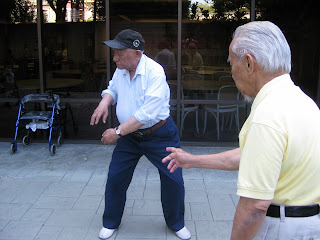 Au Si Fu learned Tai Chi from a master who was in direct lineage from Cheng Man-ch'ing who modified Yang Style to elevate its health benefits. In the photo above, he's teaching his longtime student Mr. Fong who is 90. That's Mr. Fong's walker in the background.

Au also continues to gather Chi Kung info off the Internet (You Tube) and incorporate it in his teachings. His children gave him a digital still/video camera, and we actually engaged more in documentation than in class this time around.

I found it personally embarrassing. I arrived out of shape and forgetful of the movements. Si Fu was delighted to see me, and kept sending messages to me via bilingual Chinese friends.

In the good old days, I lived near Chinatown in Echo Park. So it was a quick hop every morning to do Tai Chi with my Chinese pals and then head off to the dim sum parlor for "Yum Cha" (literally "Drink Tea").

When I arrived in L.A. in August, I got up the courage to call my old friend Alice. We used to perform in Chinatown for annual festivals. She's pushing 70 now. Still looking beautiful. Alice has always been "head" to my "heart," "rock" to my "rushing water," and the Rational Voice combined with Christian Religion to my Wandering Jewishness.

"Au Si Fu is looking for you," she said. "He needs you to see him tomorrow at 8 a.m. at the Chinatown old people's home by the double dragons."

It was surreal to see him again. Looking thinner but as energetic as ever, he pushed me around for photos, raced me through new Chi Kung exercises ("This one to lose weight...") and re-taught the fan to me (very grateful for that).

I'd written him a letter in Kansas and he carries it with him.

Next time, I invited my friends Tom and Barbara to join us. They both are always on the lookout for new exercises and like to hear about my Tai Chi stuff. That's them in the photos above. Tom is Japanese American and Barbara's Hungarian American.

The language barrier between Au Si Fu and myself seemed thicker than ever, despite Mr. Fong's best efforts to translate....

Until Si Fu had obvious pain in his knee and had to sit down.

I asked if I could put my hand over his knee and do "Reiki." Since '84, I've been a Reiki practitioner and am now at the "master" level but I never offered it to any of my Chinese friends before. Reiki comes from an ancient Tibetan system of hands-on energy transference.

He immediately said yes. Just yes. No questions. No hesitations. Quick acceptance that my hands could help his knee pain.

We must have looked a sight: me on my knees with my hands on his knee. Him sitting on the bench in the courtyard of the retiree home with his pant leg rolled up, letting the heat go into the pain and commenting, "Her hands are hot."

Older Chinese drifted around us with their canes and walkers. I felt thankful that I finally had something I could give back to him. Something that the two of us understood beyond the clumsy language of English and Chinese:

Chi.
Posted by Marlan Warren at 9:56 AM No comments: