I'm putting the finishing touches on the blog I created for the award-winning San Diego artist Susan Weinberg-Harter whose watercolors and linoleum prints reflect her deep respect and love of nature, and her insightful traveler's eye when she ventures outside of her SoCal domain.

Susan is a "birdwatcher" and has been known to go on tour just to catch glimpses of birds she can't see from her kitchen window or strolling near the marshes of Del Mar. One watercolor recently graced an Audubon Society cover.  Here's the link if you'd like to take a peek:  http://susanweinbergharter.blogspot.com/

Posted by Marlan Warren at 6:16 AM No comments: Links to this post

Why a Doula? Women, Pregnancy and Power 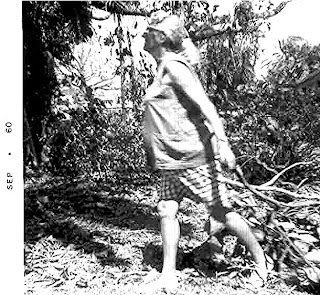 This photo of my mother was snapped by my father right after Hurricane Donna in Ft. Myers, Fla. Donna had torn the roof off the house behind us, sent boats into carports, flooded the streets, and buried our yard in debris. Mom had played the piano the whole time. The next day, despite being in her 8th month of pregnancy, my 39-year old mother was out there hauling away banyan tree branches. She'd lived through the Depression, World War II, a stormy marriage, and she wasn't going to let a little hurricane get her down. Less than a month later, my brother tried to be born "upside down," and the trauma sent her into a mental collapse so severe, the hospital would not release her for a week.

Would things have been any easier or better if she'd had a doula?

"What is a doula?" you ask? I'd never heard of one either until I met an actual doula who runs a service for pregnant women and couples, and also offers childbirth education classes in Los Angeles. This doula explained that doulas support, educate and advocate pregnant women and their expectant partners. She also expressed interest in my public relations services, so I put on my Researcher's Hat to think about doulas and what they mean to me personally.

The first thing I learned was that most people believe doulas and midwives are the same. But one main difference is that doulas act as advocates for pregnant women, helping and guiding them through their legal rights as patients.

According to Wikipedia, doula comes from Ancient Greek, meaning "female servant" or "slave." One website calls doulas "the must-have accessory for the 21st Century," making the service sound chic and almost frivolous.

Well, what about those legendary peasant women who squatted in the fields to plop out their progeny? After all these years of birthing babies (anyone seen Gone with the Wind lately?), why this and why now?
As a childless woman hearing about doulas for the first time, it was a stretch for me to comprehend why anyone would need more than a trustworthy obstetrician, a loving partner and a book on pregnancy and childbirth. Wasn't that all that my own mother in her post-World War II pregnancies had? 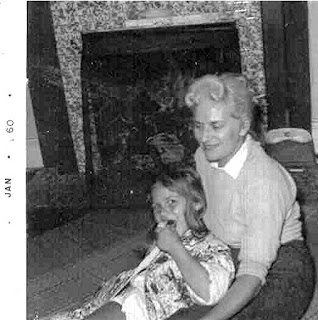 My mother came through her childbirth experience with me fairly unscathed. She complained that the problems started after I was born since I was colicky and cried all the time. Photos reveal my mother looking exhausted as she bathes me and watches me drink for the first time with both hands. 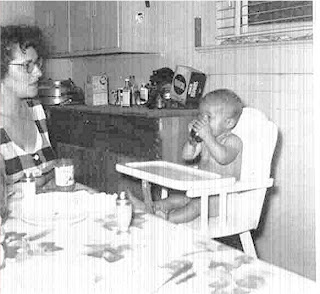 I found one website for "Radical Doulas," which it defines as doulas who may fly in the face of convention with advocacy for LGBTQ (Lesbian, Gay, Bisexual, Transsexual,
Queer) clients and even abortion [http://www.radicaldoula.com].

Full-spectrum doula services include working with first-time parents, VBACs (Vaginal Birth After Cesarian), LGBTQ families, and survivors of sexual abuse and trauma. A qualified doula can even assist at a water birth.

Next, I asked friends for their own doula experiences, their responses confirmed that doulas do very good work. One in San Francisco had this to say:

I didn't have one for myself, but have known Doulas throughout my life. They partner with women for navigating the portals of birth. They are guides, coaches and confidants who are steady and present - through the miracles of this particular life change. I don't know more than that - simply that they are stellar beings who love what they do...

I've never met a Doula who's complained about her work.

So now I am convinced that doulas are cool. There must be so much more to their service than first meets the eye in a brochure or website description. I look forward to learning more about how doulas empower and celebrate women in the birth process. 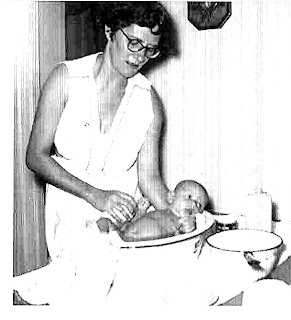 Still, I wonder if a doula could have made a difference in my mother's 1960 "breech birth"? My Aunt Vera (Dad's sister) at the end of her life revealed to me for the first time that the hospital had told my father they could not allow Mom to come home with the baby until Dad could prove that he had someone at home who could help with the baby. Aunt Vera came from her winter home in Miami, and was there when my mother was released a week after giving birth, baby in her arms and a big smile as if it had all been a piece of cake. 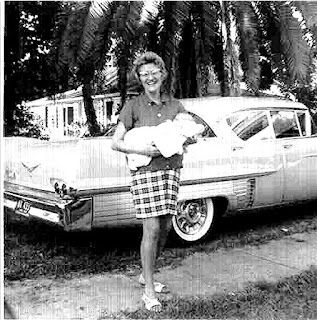 Aunt Vera could not have children, and her adopted son had married the previous year. She was my "glam" aunt whom I called "Auntie Mame" for her glitter and wealth. But there she was, helping Mom siphon off her unuseable milk, making formula, diapering, and being present. 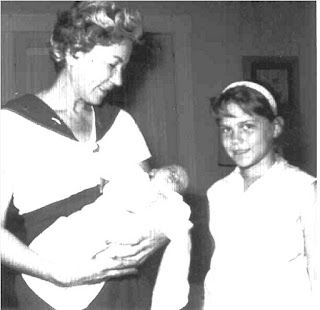 Until now, I've accepted my aunt's inference that Mom's post-partum depression was shameful, maybe even a sign of weak character. But as I study the photo of that very pregnant woman schlepping branches as tall as she is, helping my father after the hurricane, I realize that this is a woman who knew how to pull herself up by her bootstraps. The fact that her breakdown probably had so many factors (her own mother suffered a post-partum breakdown that she could not recover from) makes me wonder if an "advocate" such as a doula could have helped her get faster psychiatric attention and counseling.

My mother wrote on the back of this photo (below): "Me home from hospital with Vera and Roie." Roie was my mother's friend who had the same religious background and
a daughter my age. You can see her at the far right, almost out of the picture.... 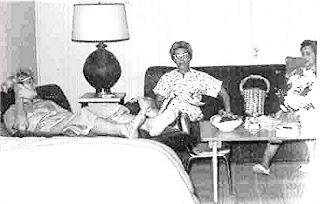 Mom (right), Vera (center), Roie (left)
[Photo ©Leonard Warren]
Sisterhood was as powerful back then as it can be anytime. My mother called them "girlfriends." I don't know what they talked about, but I believe this photo shows how their support helped to make the foundation of their women's lives stronger and helped them to stay resilient.

Perhaps midwives and doulas pick up where girlfriends must leave off, as they offer to serve with expertise and genuine care that comes from the passion of doing what you love. 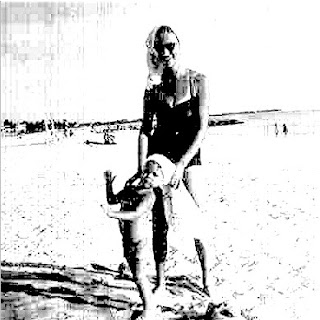 Note: This story was first published on my Open Salon blog, "Swimming in the Experience Lane" on Jan. 10, 2013

Posted by Marlan Warren at 1:40 PM No comments: Links to this post