Who doesn’t like a heartwarming, spiritually uplifting Christmas story of rags to riches? After a year of suffering cold-blooded Reptilian Brains, it’s only fitting that I wrapped up the year with an Amphibian Rescue Operation that gave Oliver Twist a run for his money. So sit right back and you’ll hear a tale…a tale of a fateful trip…

It began last Wednesday, Dec. 17, when my friend Tom, the building manager, and my no-English Armenian neighbor (whom I’ll call Armin) knocked on my door. Armin was standing in the hallway holding a tank of water with a turtle that was continuously swimming in it. After 10 years, Armin’s daughter had tired of her pet and dumped it on him.

Afraid that my cat might relieve her boredom with this unfortunate turtle, I told him to hang on to it until I could find a worthy taker.

I was hopeful that I could re-home any animal through social media. I’ve been giving and receiving unwanted stuff via a great Buy Nothing Facebook Group in my neighborhood. They make things happen.

I’m not a Do-Gooder “Save All Animals” type. I love animals, but I’m usually focused on helping other humans and myself. They say that the Road to Hell is paved with Good Intentions. And that is how this Turtle Odyssey unfolded for the next 48 hours.

1. I send out a “Save This Turtle” cry for help on Buy Nothing.

2. I also post on an “Anything Goes” neighborhood Facebook group that attracts a “different” crowd. It can get a little rowdy.

3. On both sites, the responses range from sympathetic to judgmental:

“That turtle is in trouble! It can’t keep swimming in cold water!”

“Who the hell are these monsters who want to dump a turtle?”

“How has it survived 10 years? It should be much bigger! Didn’t they ever feed it?”

“That father and daughter are disgusting people! They should rot in hell!”

“That turtle needs heated water and a rock to sit on!”

“DO NOT dump it in Echo Park Lake with all the other turtles that have been dumped there! It upsets the ecological balance!”

4. Then come the private messages. The first sounds like a slam dunk: “I’ve been looking for a friend for my turtle!” I write back. A few times. No response.

“How much do you want for it?” (So people sell turtles? Now I’m on alert for unsavory Christmas turtle scalpers who might be more interested in turning a buck than keeping a turtle well fed and happy.)

“I can come get it, but I just gave blood.” (I don’t have a car, so this would have to be Pick Up & Carry.) But a few hours later: “My husband says it might eat the fish in our aquarium so…Sorry.”

IT TAKES A VILLAGE

A lovely member of Buy Nothing whom I’ll call “David” messages me that he’s researched red-eared slider turtles and they require a clean tank with an appropriate water level, proper food, a rock or floating platform to rest on from time to time…and possibly a heat lamp if it’s indoors in the winter.

My tension mounts as my attempts to arrange a floating platform and heat lamp prove too complicated. If I had wheels and wasn’t mostly in quarantine, it might have been possible to hurry down to a pet store even after sundown. But for not for this lone ranger.

By now 100 people are following this saga online.

One admin from another Buy Nothing group, Kerin, responds to my need for assistance. She sends an email to a local reptile rescue center. No answer.

Should I take the turtle in for the night? Put it on a high shelf or on the balcony? No. That could be the road to Bigger Hell if I can’t get it adopted.

Later that evening, I receive several Facebook messages from two animal rescue zealots. One saw my distress signal on the “Anything Goes” site and contacted her friend who wants to take it to a turtle preserve in Temecula — well, halfway there (“I’ll have other turtles in the car and I’m meeting the woman with the pond halfway between here and there…”).

At 6 a.m., I get a message from The Drive-By Rescuer. Then a phone call. The more rapidly she talks, the more complicated and convoluted her plan sounds. But with no other options, I say okay. Then she says:

Now she pounds me with texts, ignoring my NO’s. Then her friend starts sending me insistent messages. Surrender the turtle! When I resist, she threatens: “I’m going to report you to the Admin as a scammer!”

A scammer. What would be the benefit in pretending to have an abused turtle that needs help?

My attempts to block them fail. Tension mounts.

By this time, about 100 people are following and commenting on online groups. I also posted on Next Door. When I check back…there’s a ray of hope. Someone sends me a picture of a handwritten sign in front of a house in Hollywood, offering to take in wayward turtles, fish and frogs. It even has a phone number on it.

I call. The guy picks up right away. Great voice. Sounds grounded and very nice. He says his car's in the shop or he'd come right away and pick it up. If I can wait until late afternoon, maybe he can drive over. But I feel it's best not to delay. Armin is impulsive, crazy, and emotional. I fear for this turtle's safety.

The Turtle Man advises me to pick up the turtle and put it into a dry box. Just for the 20 minute ride. "They sometimes bite, so pick it up by its sides." Then I ask Kerin if she can transport. She says yes until we get to the "may bite" part.

So now Mr. Turtle has a destination, but needs transport. What if Armin goes out for errands? I need that turtle here. But he doesn't pick up when I call. So I call Tom because he has a key to his tenants' apartments, but he gets really upset ("It's HIS problem!"). I lose it. I start shouting:

"JUST FUCKING DO IT!" I CAN'T TAKE THIS ANYMORE!"

Normally, Tom would explode if I cursed at him, but exhausted, he says: "Okay." A few minutes later, he calls and says: "Arthur is bringing it down in a shopping cart.'"

Arthur arrives with the still-swimming turtle and the still unopened bag of "Turtle Topper" which he calls food.

I see red. I don't remember anything after that. I don't know what he said or did that made me start screaming at him. I remember him putting the tank on the floor next to my desk and I remember shouting: "GET THE OUT! GET OUT! GET OUT!" and shoving him out the door into the hallway.

So now I'm looking at this poor little creature in the water. I get some little pieces of lettuce leaves and toss them in, but it expresses no interest. I open the bag and toss a few petals in, but again, nothing.

David, the genial turtle researcher, had messaged me that he would help in any way. I decide to stop second guessing and just call him. He responds right away: "I can be there in 15 minutes."

David shows up. We're both masked and keeping distance. He swiftly and gently lifts the turtle and puts it into a box.  And they are off.

I'm still not sure if I've done the right thing. But I feel relieved. A few minutes later, I research this Turtle Man's name and find his FB page where he has a lot of posts about the Zen-type Garden he's made in his backyard. Including a gorgeous video of happy turtles enjoying themselves in their own private area. His name is Dante Rusciolelli. A well-known comedian.

A half hour later, David messages me that Operation Turtle is a success. I let Tom know and he apologizes with a text that says: "We can never rescue an animal again!"

David fills me in. Dante and his wife are sweet and funny. They leave the back door open so the turtles wander inside and hang with the dogs whenever they want to. Plus Dante regularly bathes the turtles by hand in special temperature water. And the sanctuary keeps the creatures separated according to species. The turtles have a hiding place so raccoons can't get to them.

L.A. can be a tough place to navigate. When I came back 10 years ago, I had my rose-tinted glasses on. Kissing the ground. My good memories of good friends pulled me back. Time helped to dissolve most of those connections until I found myself isolated and down. Gradually, 2020 turned out to be surprisingly the "worst of times and the best of times" for me as I found new people of like minds on social media that revolve around my own neighborhood during this horrible Pandemic. That synergy has renewed my faith in others as well as myself.
May your holidays bring you what you need. And if you're lucky, what you really want.
God bless us, every one!
WHAT HAPPENED NEXT


David created a pictorial odyssey that follows the turtle's first steps into Turtle Heaven. Here are a few of my favorite moments with his narrative:

Not since P-22 was found in the basement of a Los Feliz house has the world been so transfixed with an outcome of an animal rescue. None of this would have been possible without the kindness of Marlan Warren. I just went along for the ride.

All the following photos are by David David, copyright protected. Dante Rusciolelli gave me permission to use his name, likeness, and contact info. He sent me this message:

"The turtle is loving his new life. I don’t think he had ever seen other turtles before, he’s so excited. Every day he looks like he’s having the time of his life. He’s been in basically a cage his whole life until now." 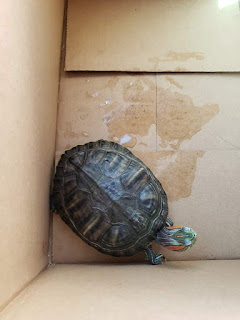 Posted by Marlan Warren at 7:04 PM No comments: