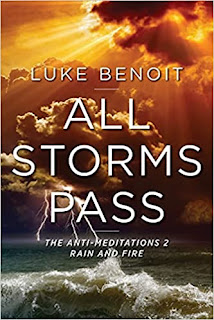 NEW BOOK REVIEW!
August 2021
We're thrilled to receive this brilliant and thoughtfully literate critique from the award-winning poet/author/screenwriter Drew Weinbrenner! Printed here in its entirety.
Inspiring! In the amorphous space between poetry, self-help, aphorism, personal development and mantra lies Luke Benoit’s new masterpiece: ALL STORMS PASS, THE ANTI-MEDITATIONS 2 [Rain and Fire].
Because more than one thing is going on in this work, ALL STORMS PASS cannot be relegated to the Personal Development shelf of Oprah’s Book Club. It is a brutally personal and specific literary work that documents the battles our collective egos fight daily.
Is it poetry? A life-coaching workbook? Affirmations for those in tough times? A memoir proudly cataloguing hard-won wisdom? The artist’s numerous motives rise from his experience as an educator, counselor, and coach. The reader can feel the visceral practicality of truisms like:
If you keep
doing what
you’re doing,
you’re gonna
keep getting
what you’re
getting.
ALL STORMS PASS is not new age, feel-good, escapism. The book is relentlessly pragmatic and unpretentious, boiling down the inner voices of a wide array of personal narratives that prompt the reader to recognize themselves in each profile.
Most personal development books originate from a philosophy or belief system. Without fail, the first step in enlightenment is an obligatory consensus on those values. The premise being that if we can’t agree on what enlightened detachment is, the reader has little hope of finding their way to it on their own from wherever they are.
ALL STORMS PASS takes the markedly different approach: you do NOT need to be a different person, in different circumstances, with a clear vision of nirvana. It gives you permission to be exactly the hot mess you are, owning the circumstances in which you find yourself, and saying right here, right now, just as I am and you are, some semblance of inner peace in available to us - if we’d just have the self-esteem to take it. The meditations do not aspire to perfectionism, and instead embrace what’s real and actual in each scenario.
Unlike the work of artist Barbara Kruger, whose charged slogans are steeped with ironic social commentary in the form of 20th century marketing campaigns, Benoit’s words externalize and objectify the most intimate and corrosive declarations we say to OURSELVES, and then respond - with pragmatic love and humor.
Text layout, in an E.E. Cummings freeform typography, requires the reader to digest each word or phrase in sequence. The text deliberately slows down the desperate eye, and the manic mind, to demand consideration of each idea. Benoit bravely holds up these confessions until the reader sees their own motives, impulses, self-indulgence, mania, self-sabotage and sublimation in self-context.
The reader cannot be ambivalent about the profiles. Immediately, the ear assesses the self in relation to each scenario, triggering judgement, nostalgia, regret, sympathy, titillation, and a detached reflection on all we’ve survived.
In the end ALL STORMS PASS is for anyone who ever needed to manifest the inner voice crazy-making in their head. It seems infinitely easier to be objective when it is fixed on the printed page, and captured tangibly in the hand. In some mystic and strange way, ALL STORMS PASS raises our stream of consciousness to the level of art. Wonderful.
About this Reviewer: 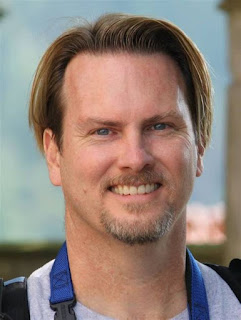 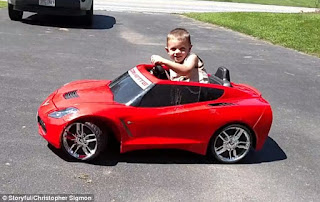 When you think of L.A., you may think "Cars," but do you also think "Poetry"?

Award-winning poet Carolyn Howard-Johnson recently re-published this lovely poem on her Facebook Page. It evokes in delicious detail her neighborhood walks past a neighbor who enjoys tinkering with his car. She has given me permission to share it (even if you are not a "Poetry Buff," I believe you will find this an enjoyable read:


The Vintage Corvette and Its Man

The man who polished
his Corvette to the sound
of concertos—usually
piano—crackling slightly
(radio tubes), a lament
in the dusks of some twenty
summers, wasn't there last
spring or this. I didn't interrupt
his idle then, lying there beneath
his aqua and blue rrrrrmm,
rrrrmmm, plates coded black
and gold from, California 70s, no,
more like the 50s…likely
the one he spit-polished
in his teens, couldn't disturb
his meditation. Now,
I walk my dog in June,
jasmine in the evening
air—unseen blossoms—I long
to hear his garage door yawn,
again see the bulb in a cage
hanging from its umbilical
cord above his workbench,
hear KMozart broadcast
from that radio (shaped
like a gothic window), older
than the car itself. Then in
twilight, I hear the door
rise on its springs. Trixie
and I cross the street
specters in the quiet. A chamois,
untended, brittle, cracked, sits
atop the crusted hood,
his wife carries a plastic bag
tied like a bandana
around decay—doesn't bother
with light or radio—tells
me, this vintage thing, tires
now cracked, is waiting
for magic emollients,
Carnauba, Magclean
ArmorAll and his grandson
to come from Cleveland to claim
it, once he’s old enough to drive.
Originally published in
Cyclamens and Swords
Carolyn Howard-Johnson's new, rather brilliant book of poetry, Imperfect Echoes: Writing Truth and Justice with Capital Letters, lies and oppression with small is available at Amazon. Please check it out! 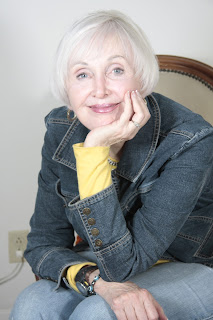 Hook up with Carolyn and enjoy her communications at:
Sharing with Writers and Readers blog (A Writer's Digest 101 Best Websites pick!)
How to do it Frugally.com
Carolyn Howard-Johnson.com

You can subscribe to Carolyn's newsletter by sending an e-mail with "subscribe" in the subject line to HoJoNews@aol.com. 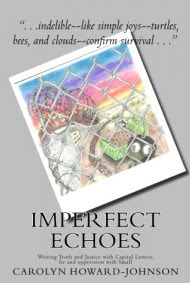 
Narcissus knows her reflection
well. She forgets to peer
under burkas, in our jails,
in the beds of the abused,
deeper, deeper into the pond...
—Howard-Johnson, Carolyn. Narcissus Revisited. Imperfect Echoes.

Reading Carolyn Howard-Johnson's Imperfect Echoes made me want to write poetry. This Los Angeles award-winning poet lays out the landscape of her contemplative thoughts, feelings and reactions with such honesty and deceptive simplicity that they have the effect of offering a peek into her private journals. Yes, it would be wonderful to succinctly express my impressions in a well-crafted poem; however, what puts this poetry on par with leaping tall buildings (and thus out of my novice's reach) is the fact that each poem herein manages the feat of conveying personal and universal relevance at once.

If you are someone who gets scared off by the prospect of political rhetoric masquerading as literature, be advised that this is not one of those books. Although the book's subtitle, may strike some as rather lofty, it is a quote from Czeslaw Milosz's poem, Incantation, in his anthology, The Captive Mind, which reflects Howard-Johnson's poetic themes. She has divided her prolific poems into a Prologue plus four sections:

1. Remembering What We Must
2. Nations: Tranquil Self-Destruction
3. Acceptance: Waiting for the Gift
4. Future Stones of Distrust

Howard-Johnson deftly blends the "Truth and Justice" observations with the "Small" moments of "lie(s)" and "oppression" as they intersperse through her poet's journey. The poems in Remembering What We Must address the stark realities of war and global misery, which Howard-Johnson treats with her practiced light touch that floats like the proverbial butterfly and stings like an outraged bee. In Belgium's War Fields, she compares the reasons for bygone wars to our present day confusion:

And now a war that takes from the mouths
and hearts of the stranded, the homeless.
How different from those who
marched with snares or flew flags
in a war when we knew
why we were there.

In the Nations: Tranquil Self-Destruction section, The Story of My Missed Connection in Minneola brings to life a brief rest stop during a road trip, which seems rather amusing at first as the wife relieves her bladder and the husband declines the coffee with Let's skip it. Coffee's / probably been stewing for days... but hits an unexpected bump of overt bigotry when the roadside store owner confides in them (in between the screeches of his pet parrot) that he left Los Angeles to get away from the ragheads. [Howard-Johnson explains in a note that the form is a "stoerem," invented by poet Harry Gilleland.]

In the Acceptance: Waiting for the Gift section, Relatives really gets down with the ways in which "Small" minds can make a family dinner feel like a stint in Purgatory:

Perhaps you won't invite me back
if I mention that infamous
uncle. You know, the one who killed
three of his wives
but is candid
about who he is,
how many he's killed,
the methods he used
and never gets invited to dinner.

In the Future Stones of Distrust section, Rosa Parks Memorialized opens with On the day our September losses / reached 2,000, a tribute / to Rosa...and asks If she were alive now.../ would her solo / be enough or do we need now a choir singing, / thousands screaming...? In keeping with the contemplative style of all her poems, Howard-Johnson answers her own question with a truth that gave me chills:

Come to think of it,
that was required then, too. Elegant.
Gentle. Firm. But not
enough without the rest of us.

Imperfect Echoes allows readers to witness a poet's lifetime revisited in memory and with fresh wisdom. If the topics of oppression, prejudice and war seem to some "overdone," Howard-Johnson responds in her Prologue poem, Apologies from a Magpie:


Magpies are born to sing others' songs—
stained notes, imperfect echoes—
until the world begins to know
them by heart.

Accepted for inclusion in Poets & Writers prestigious list of published poets, multi award-winning novelist and poet Carolyn Howard-Johnson is widely published in journals and anthologies. She is the recipient of the California Legislature's Woman of the Year in Arts and Entertainment Award, and her community's Character and Ethics award for her work promoting tolerance with her writing. She was also named to Pasadena Weekly's list "Fourteen San Gabriel Valley women who make life happen" and was given her community's Diamond Award for Achievement in the Arts. One of her poems won the Franklin Christoph poetry prize. She was an instructor for UCLA Extension's world-renown Writers' Program for nearly a decade. Learn more about all her books at http://www.howtodoitfrugally.com.

COMMENT:  From Carolyn Howard-Johnson
Just exquisite. Because you a writer, you know how special it is to have someone else appreciate your work! Thank you so much. You write such great, professional reviews. No wonder Midwest Book Reviews uses your work, too!