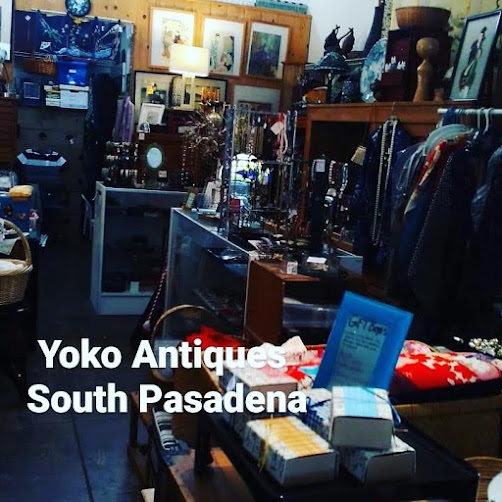 Yoko Japanese Antiques is an enchanting Old School shop with a friendly, chatty, knowledgeable owner (Lisa) who runs it now that the former co-owner and her mother, Yoko, has passed away. Lisa wears a mask and keeps social distance while telling lively, entertaining stories and overseeing the mass of jewelry, vintage kimono fabrics, Japanese books & DVDS, miniature dolls, and gorgeous carved pieces.

Prices run from a couple dollars on up.

I bought two lovely pins for $8 each.  And plan to return to buy more of these one-of-a-kind treasures.

Twenty-five years ago, I commissioned Yoko to make me a "noren" (Japanese door curtains). She let me pick the fabric, and made it for me. It was on the recommendation of Amy at Ai Restaurant, who had several beautiful noren by Yoko.

Now, more than ever, this lovely shop needs shoppers!

I hope we can keep this South Pasadena gem going.

UPDATE:
Yoko's is closed on Mondays.
I went back last week and took more pictures. The place is sooo photogenic!
#YokoPhotos #JapaneseAntiques 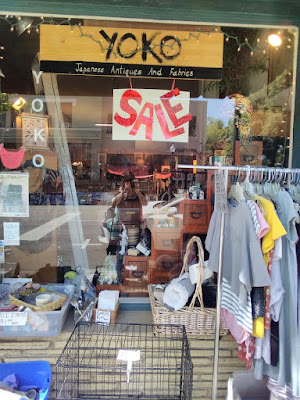 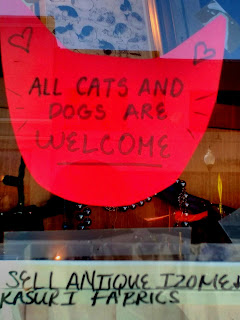 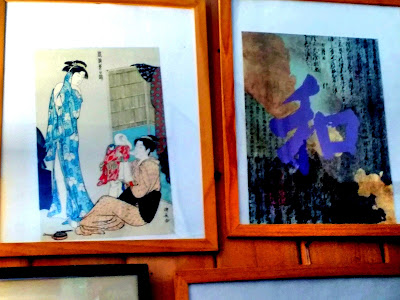 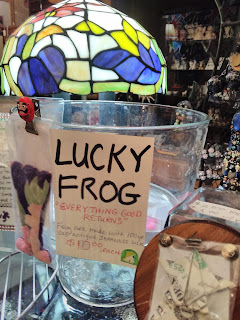 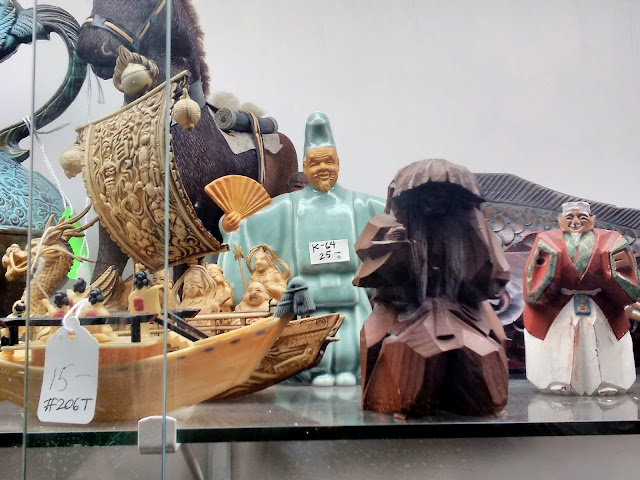 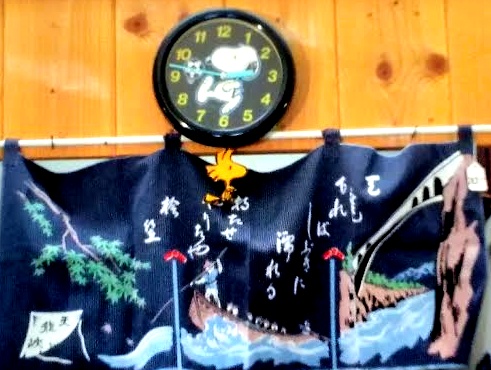 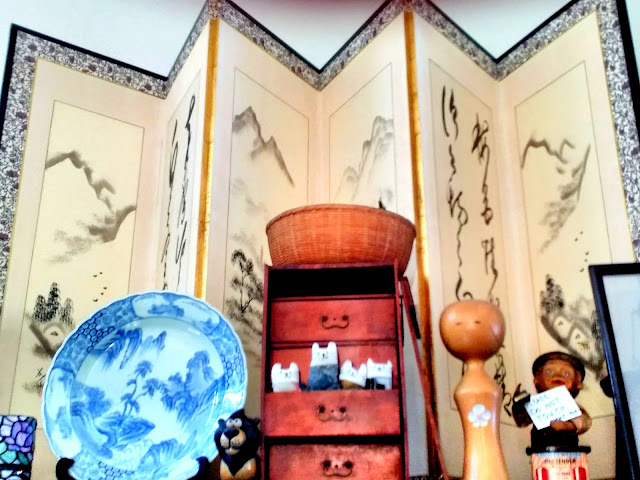 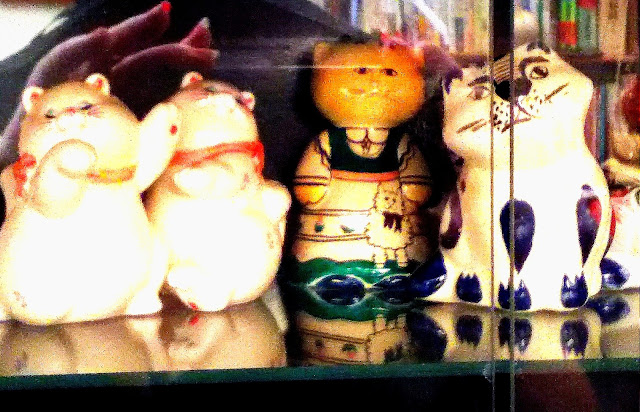 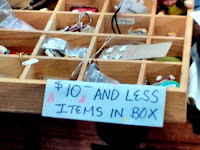 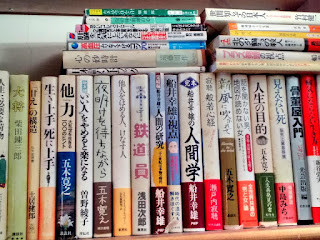 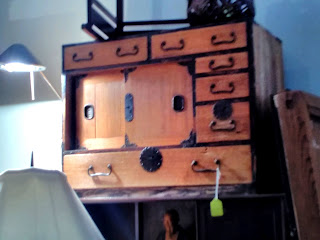 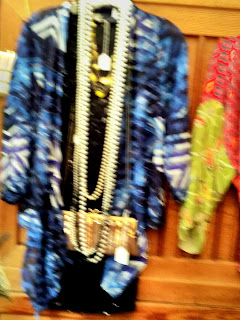 Sorry for the blurry picture!Plenty of vintage kimonos!
Posted by Marlan Warren at 10:41 AM No comments: 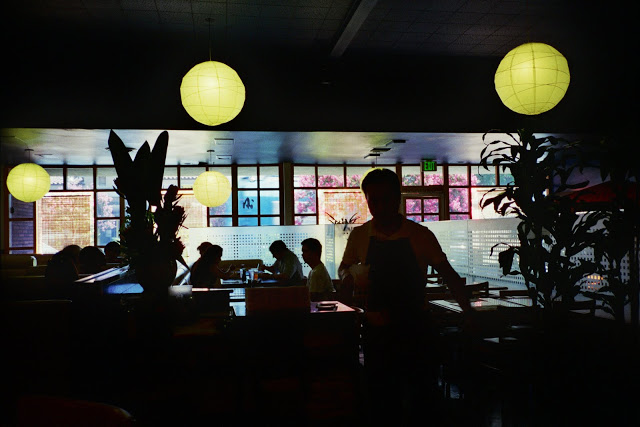 The online arts and culture magazine “The Artifa[ctuals]” is currently running an excerpt from Adam Novak’s upcoming hallucinogenic Hollywood novel, Rat Park (slated for release in 2022 by Red Giant Books). Novak is also the acclaimed author of Take Fountain, The Non–Pro, and Freaks of the Industry through Sunday, April 11 (after which, you can read it in the archives).

On Monday, April 12, the magazine will feature an excerpt from Marlan Warren’s upcoming novel, Tales of Sushi. The story focuses on the attraction between a lonely Caucasian American divorcee and a charming Japanese chef, who forge a cross-cultural friendship amid a lively sushi bar scene in the L.A. area.

“The story is based on my diaries from when I frequented this Cheers-type sushi bar in Pasadena in the nineties,” says Warren, who is also the author of the novel Roadmaps for the Sexually Challenged [All’s Not Fair in Love or War].

Editor Aris Janigian created “The Artifa[ctuals]” in the spirit of the Large Hadron Collider: “Our aim is to create a collision space for critical thought and artistic expression, and we welcome fellow travelers on our ever-evolving journey towards ‘a more perfect Union.’”

Janigian is an author in his own right. His novels include Waiting for Lipchitz at Chateau Marmont, (17 weeks on the Los Angeles Times best-seller list), This Angelic Land, and Waiting for Sophia at Shutters on the Beach.

Posted by Marlan Warren at 3:16 PM No comments:

Posted by Marlan Warren at 7:31 PM No comments: 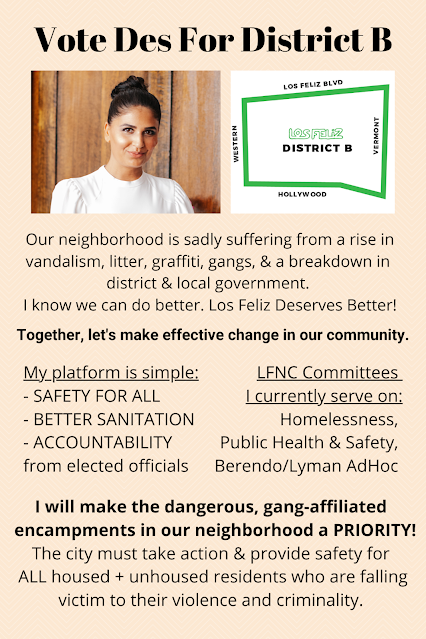 Four years ago, I contacted management of Center for Inquiry, the quaint building that was located at the corner of Hollywood Boulevard and Berendo Street, across from Barnsdall Park in Los Feliz, and asked about their theater rental rates. "They're tearing this place down!" said the guy who answered the phone. "Forget it!" And tear it down, they did. However, only a bare, neglected patch of land was left in its place. In recent months, this formerly sedate and upscale residential L.A. neighborhood has seen tents and squalor take root all around this corner, and gangs have moved in.

There may be some homeless in those tents, but neighbors posting on Next Door have increasingly reported a terrifying situation in which taxpaying, law abiding families are now confronted with gangs who have set up headquarters under cover of the tents, and now stoke residents' fears with gunfire, threats, burglaries, tagging...and now a gang war over turf.

Desireh "Des" Sedaghat is running for a seat on the Los Feliz Neighborhood Council (LFNC) for District "B" on the "SAFETY FOR ALL" platform. The following interview delves into her motivations and her goals.

The fact that these residents' pleas with law enforcement and city officials has so far gotten them nowhere could mean that criminals will see this inaction as a Green Light to spread out and continue harming innocent citizens in a wider radius of Los Feliz.

This year, the only way to vote for candidates on LFNC is by requesting a ballot from the City Clerk, and mailing your filled out ballot by Tuesday, April 6. You'll find Ms. Sedaghat's name at the bottom of the list of candidates under the heading "District B") and she's listed as "Des" (not Desireh).

What is your background and experience that you feel qualifies you for this position on the LFNC?

I grew up in the middle of a war torn country. My family and I fled to the US because we had been oppressed and our lives endangered due to our religion. Furthermore, my parents couldn't bear raising two daughters in a country where we had less rights just for being girls and not boys.

Ever since I arrived in the US at 8 years old, I have never had a day where I took for granted the sense of community, freedom and safety that this country had provided us. I have lived in LA since I was 9, and have lived in Los Feliz for 8 years and love the diversity and community that exists here.

However, for over a year, I have seen firsthand the community be torn apart and threatened due to crime, gangs, violence, sales of drugs & vandalism. I dedicated the last 1+ year of my life to doing anything and everything I can to help restore safety for all in our community. I have dealt with the Mayor's office, CD4, LFNC, LFIA, LAPD, LAHSA, PATH as well as countless neighbors in an effort to help.

As an elected official on the LFNC, I will have more direct access and opportunity to make a positive difference in our community and will be an ear for anyone in need in the neighborhood.

I am also a founding member of the Berendo/Lyman/Rodney Safety AdHoc Committee. I've attended every LFNC meeting that I can and am also a member of the Public/Health & Safety and Homelessness Committees.

What, if anything, have you personally experienced as a threat to your safety since these "homeless encampments" have had an influx of gang activity?

First of all, I'd like to address one thing in this question: This is not a homelessness issue - it's a safety issue. I am very compassionate and have reached out to CD4 regarding the true unhoused individuals I see nearby on Hollywood Boulevard. The Berendo encampment is a gang encampment. Nothing more, nothing less.

Gunshots were fired at the Berendo Encampment right outside my living room window on January 27 -- it was a gang-related shooting over a stolen Mercedes Benz.

My neighbor had a knife pulled on him.

We have had members of the encampment ring our doorbell and pretend they're beheading us by running their finger across their neck. And they have gestured with their hand that they're going to shoot us.

How do you know for certain the violence, home invasions, and drug selling are attributable to gangs who have "moved in."

For anyone doubting what's really going on, I urge you to get in touch with Senior Lead Officer Leo Rey at LAPD Northeast, SLO Lenny Davis & and Neighborhood Prosecutor Gabby Taylor.

What would you say is the biggest frustration the surrounding neighborhood of Berendo and Hollywood Blvd. has faced and still faces?

The biggest frustration is getting help from the Los Angeles City Council, District 4 (CD4) office. They are well aware of the situation and are proactively choosing outreach as the only solution to this problem. Well, I think outreach is great and I'm glad they are taking steps in helping our unhoused neighbors, however, in the specific case of the LML encampment on Berendo, outreach has been doing and will continue to do zero good.

The neighbors have also been demanding a meeting with Councilwoman Raman for MONTHS. She lives just a few minutes away in Silver Lake, and yet she's too busy to face us and hear our traumas firsthand, but somehow has the time to go to the Echo Park Closure protest which isn't even in her District. Frustrating doesn't even scratch the surface.

What specific actions toward resolving this situation would you take if elected? And what would you anticipate as the greatest challenges?

The greatest challenge will be to have the city care enough to keep all residents safe -- not the housed at the cost of the unhoused and vice versa. Safety shouldn't be an either/or.

I will also try my hardest to hold the owners of the empty lot of Berendo/Hollywood responsible for their negligence in keeping the lot unsecure.

Posted by Marlan Warren at 6:16 PM No comments: