This just in from Los Angeleno Barbara Tira who experienced--as many of us do from time to time--A Day from Hell in L.A.--yesterday. I've wondered a long time why pain is so funny after the fact. It just is.

Barbara and I went to a matinee in Hollywood (the REAL Hollywood, folks--Hollywood Blvd. at Highland which resembles now more than ever that opening scene in "Children of Paradise" on the Boulevard of Thieves in Paris, circa 18th Century). After the film, on our way out of the maze that is the indoor mall that houses Grauman's Chinese Theater, I stopped to ask a guard why there was a red carpet in front. Who were they expecting? He just shrugged and said, "Celebrities."

Two days later--yesterday--Barbara returned to experience her own little corner of Hades. If you've read "Day of the Locusts," you're already halfway there. Barbara, take it away:
***
Last night I found out (the hard way, of course) what the red carpet was for at AFI.  Against my better judgment, I agreed to meet Carolin there, ticketless, with highest hopes of somehow getting in to "Marriage Italian Style." As she was already on the west side, I thought it best to take the bus and meet her there and drive home together.  So much for good thoughts.

I raced to Echo Park and Sunset and waited for the long overdue #2 bus.  Arriving at Sunset and Vermont, already being late,  and hearing the announcement for the Red Line, I thought to debus and hop the train to speed up the commute.  At the bottom of the stairs I realized I needed the lost-in-the paper-chaos-at-home TAP card to board.  Scurrying to the rants of a crazy young girl drinking a Red Bull, I headed upstairs to get back on the #2 bus that I just got off and paying once again to be even later.  After spinning around on the corner a few times, I caught sight of a #2 Bus and made it aboard.  I plunked in my 55 cents and was called back by a voice saying, "It's 75 cents."

After a confusing interchange and learning that on Sept. 15 the senior fare was raised, I dug deep, encountered and entered a dime, when I realized I needed more.  Meanwhile, the foreign lady who boarded with me was also called back and called upon to cough up more coins.  The poor woman had no comprehension of what was going on.  I scrounged up the last remaining coin on my person, a quarter, and added it to the kitty, now over paying, but happy to have that last cent to not be thrown off the bus.  I noticed that eye exchange between the clueless foreigner and the determined driver and added,” Maybe she could get some credit from the extra I put in," while envisioning the poor woman being ejected from the bus.

Arriving at AFI and the all shenanigans going on there, I shouldered my way through the horde gathered.  Finally finding someone who could bother to talk to me, I was forcefully shooed away and forbade entrance.

Carolin called, frantic.  "I'm at the parking garage and there's fire trucks all around and cops are yelling at me to leave, saying there's a fire.  I'm trying to get out but all the streets are blocked.  I don't know where I am.  I'll call you back when I can safely stop and see and use the phone."

As I walked the labyrinth through the Chinese Theater Complex searching for Hollywood Boulevard, there next to me, walking down the red carpet was the black beaded gowned, 4-man bodyguarded Sophia Loren, smiling, waving, signing autographs with each tentative step, probably wishing more than me to be outta there.

I thought only you, Marlan, could appreciate this Hollywood fiasco.

Barbara Tira is longtime resident of Echo Park in L.A., Body Harmony and Family Constellation Practitioner/Healer, and the Author of the upcoming memoir (working title):
DETOUR: MY JOURNEY FROM CATHOLIC SCHOOL TO IMPRISONMENT TO FREEDOM.

Posted by Marlan Warren at 4:13 PM No comments: 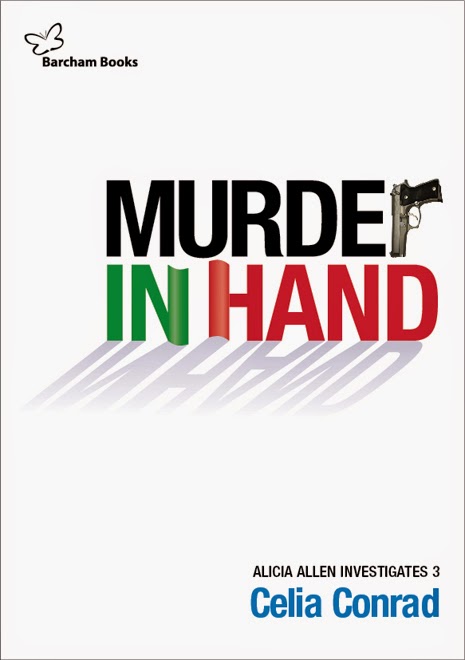 
In her cerebral legal mystery, Murder in Hand, Celia Conrad pulls her feisty London Probate/Estate lawyer heroine, Alicia Allen, deeper into the quagmire world of unscrupulous attorneys, the unfortunates who work with them and their unsuspecting innocent victims. In this third book of the Alicia Allen Investigates Trilogy (AAI), Conrad hits her stride as a bona fide puzzle master in the tradition of Agatha Christie. The easy-to-follow plot line keeps readers guessing and the pages turning, while great pleasures lie in Conrad's refusal--or perhaps inability--to write for the lowest common denominator of brain power. Instead she aims for the highest.

If you want to roll with Alicia Allen...better bring your A-Game (and some knowledge of the Classics wouldn't hurt).

Murder in Hand could be enjoyed as a stand-alone book if readers don't mind not knowing the history between the justice-loving attorney Alicia Allen and her adoring cohort Alex Waterford; her investigator friends, Jo and Will; or her cultured elderly neighbor Dorothy.

The story takes off when Alicia's Italian American client Fabio confides that he believes someone is trying to kill him. Fabio's family ties span New York, England and Italy/Sicily; and when his sister is killed in the midst of doing some family estate research in Italy, Alicia embarks on a quest to find the killer. 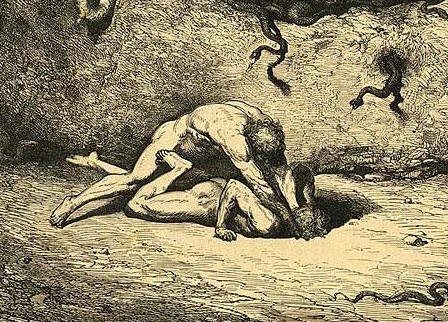 "I can't leave you alone for a few hours without
somebody else being murdered."—Murder in Hand

As in Books 1 and 2 (A Model Murder and Wilful Murder), Alicia leaps where proverbial angels fear to tread, resisting Alex's concerns for her safety. and soon he is helping her sort the puzzle pieces as the body count goes up (with the neat twist that as they hone in, it is lawyers or their assistants who are now dropping dead). Their relationship has matured into an easy partnership built on love, trust and the potato chip that rhymes with "Tingles." It provides a soothing stability that contrasts with the dark, random world of mayhem they are navigating together.

"I generally advise my clients to make both
a British and an Italian Will."—Murder in Hand

All the AAI books turn on classical theater or operatic references or clues. Murder in Hand pays homage to Gianni Schicchi (which Puccini based on Danté's Divine Comedy), a comic opera about a dead man's Will gone wrong, schemers and estate swindlers. And it won't be spoiling too much to divulge that key action takes place in the Italian town that hosts an annual Puccini festival.

The book's title is a double entendre. British police refer to an investigation in progress as "in hand." And as for the other meaning...well, you'll just have to read the book, won't you?

(Hint: Bone up on your Puccini!)


Posted by Marlan Warren at 7:44 PM No comments: